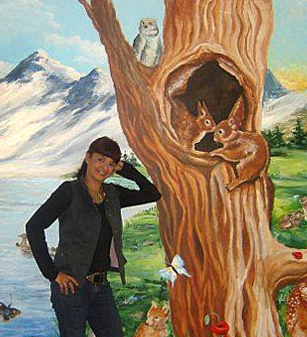 Char Vanderhorst
Artist Statement
"My passion and vision is to paint images that portray international cultures. When painting I want to communicate their ancient history and ethnic beauty in my artwork. I enjoy painting nature—striving to capture it’s beauty in its purest form. "

A Quick Overview
Char Vanderhorst has been working as a professional artist specializing in such media as watercolour, oil, acrylic, collage, stone tile, and graphite. She has been a member of many art clubs and societies where ever she has lived. She is very energetic and committed and has completed many art projects. She is a committed PR person as well.

Education
University of Manitoba School of Fine Arts with a Diploma of Fine Arts.
2009-ongoing. Currently mentoring with Sharon Graham Sargent who was in 1983 Nominated for the Nobel Peace Prize for artwork done on behalf of World Peace.

Experience
Taught art with the Winnipeg Parks and Recreation Department, and the Airdrie Adult Education Department, and the Calgary School of Hope (Art Assistant), and the Calgary Montessori School teaching and organizing art classes.
Teaching private art lessons and group classes at the over 50s Club Worked with Archmedia Designs of Airdrie. Was (publicity person for the Calgary Chapter, CFA Canadian Federation of Artists.
Currently publicity person for The Airdrie Artist Guild. Past program coordinator, organized annual art shows. Created artwork for The 2005 Africans Children’s Choir Music for Life Publication Calendar which sold worldwide.1988 -1989 designed newsletters , for the Manitoba Society of Artists.